Just when you thought all was well and good in the mystical town of Beau Rivage, another destined curse begins to unfold. As a sequel to the first book KILL ME SOFTLY, the book TEAR YOU APART is yet another torturous tale of two teens destined for either love, or death. In this somewhat twisted fairytale, Viv lives a rather ordinary life on most days. She hangs out with her friends, enjoys having fun, and waits everyday for her evil stepmother to have her huntsman rip Viv’s heart out. Viv shares her Snow White’s curse with her old best friend Henley, who is destined to become the huntsman who is ordered to rip out her heart, before she breaks his. The only thing that can seemingly save her is her prince to be Jasper. There’s just one catch, Jasper is a prince of the underworld, and cannot come to the surface of Beau Rivage. Will Viv continue to live in fear on the surface, never knowing what fate Henley will choose for her? Or will she run to the depths of the underworld, into the safety of her prince Jasper?

Posted by ewright91blog on August 1, 2017 in Fairy Tales, Realistic, Romance

In this whirlwind of a novel, Mirabelle is an average teenage girl, who lives in an average town. She has two loving godparents who take care of her, and although they’ve been strict with her upbringing, they give her the love and support she’s needed since her parent’s tragic passing. Beyond this seemingly simple life Mira has been leading, she holds within her a secret that is dying to get out. Just a week before her sixteenth birthday, Mira decides to run away to the place she was born, Beau Rivage, to finally visit her parents graves, and make peace with their deaths. However, once she gets to this town she realizes that things are not always as they seem. Here, in this tucked away town, it seems that magic and curses are all too real. Princes and princesses are destined to find each other, fairies flirt with people’s destiny, and what used to be average teenagers, try to escape their fate. Of all the uncertainty, and secrets hiding in Beau Rivage, the most important thing to remember is that not all fairy tales have a happy ending.

Posted by ewright91blog on May 23, 2017 in Fairy Tales, Realistic, Romance

The Wrath and The Dawn

Synopsis: In this re-imagining of The Arabian Nights, Shahrzad plans to avenge the death of her dearest friend by volunteering to marry the murderous boy-king of Khorasan, but discovers not all is as it seems within the palace.

I really enjoyed this story it is well written and the world is mesmerizing. I feel as though you get to know the main characters and a few minor pretty well.   Shahrzad is a smart, strong character that has a quick temper and a silver tongue.  She uses her storytelling skills to stay alive the first night, but than must rely on her wit to stay alive while she tries to find the best way to kill the boy-king.  It is part of a saga, so I am not sure how many books are going to come.  I am almost done with the second book and still loving the story.

Synopsis:  Sixteen-year-old heiress and paparazzi darling Liddi Jantzen must save her brothers in this outer-space retelling of Hans Christian Andersen’s The Wild Swans.

Review:  I picked this up because I loved the cover, but I wasn’t quite sure I would like something about an “heiress and paparazzi darling.”  Thankfully, I am a sucker for fairy tale retellings, especially if there is something special about them.  This is a futuristic (and other-planetary) sci-fi that addresses the issues of genius, the supernatural, the meaning of life, the value of the written word, and specialization vs. generalization.  Mostly, however, it is a story about a girl who loves her brothers so deeply that she is willing to risk everything to save them.  The connections to The Wild Swan were well done, but did not interfere with the world building.  There is romance,  but I let my 8 year old read the book.  I don’t know if she will like it, but there is nothing objectionable in it.  Recommended for fans of Cinder.

Synopsis:   Kahlen is a Siren, bound to serve the Ocean by luring humans to watery graves with her voice, which is deadly to any human who hears it. Akinli is human—a kind, handsome boy who’s everything Kahlen ever dreamed of. Falling in love puts them both in danger…but Kahlen can’t bear to stay away. Will she risk everything to follow her heart?

This was such a spellbinding book.  I loved the way she writes the character so heart felt.  She is unique and feels so many things and does not know why until she asks the Ocean more questions.  The twists and turns keeps you on the edge of your seat and you will never guess the ending.  Surprising what people keep hidden because they just don’t think it’s possible.  Can’t wait to for the sequel to see where she takes it, there are so many possibilities.  A great read for 8th grade and beyond. 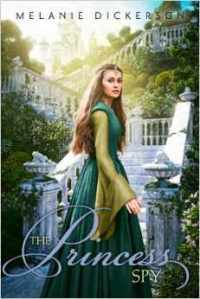 Synopsis: Margaretha has always been a romantic, and hopes her newest suitor, Lord Claybrook, is destined to be her one true love. But then an injured man is brought to Hagenheim Castle, claiming to be an English lord who was attacked by Claybrook and left for dead. And only Margaretha—one of the few who speaks his language—understands the wild story. Margaretha finds herself unable to pass Colin’s message along to her father, the duke, and convinces herself ‘Lord Colin’ is just an addled stranger. Then Colin retrieves an heirloom she lost in a well, and asks her to spy on Claybrook as repayment. Margaretha knows she could never be a spy—not only is she unable to keep anything secret, she’s sure Colin is completely wrong about her potential betrothed. Though when Margaretha overhears Claybrook one day, she discovers her romantic notions may have been clouding her judgment about not only Colin but Claybrook as well. It is up to her to save her father and Hagenheim itself from Claybrook’s wicked plot.

Review: I thought this was just such a refreshing book. This author retells classic fairy tales with historical details. Since it is a Christian book series it had all the elements of a classic fairy tale in that it does not have foul language, and it alluded to many different relationships without going into detail.  Truly a clean and fun addition to the series.  I would recommend this to young girls looking for fairy tales but that are fun and interesting.  This story always keep you engaged, wanting more.  It is fairly short and a quick read.  You could recommend to younger middle schoolers if they wanted more mature content without the details.  I look forward to reading other novels in the series since it ties in all the different characters so well and give information about each character.

Synopsis:  A girl, stuck in a world that doesn’t seem very magical, starts to read and reread a fairy tale book from the library with hand drawn pictures.  She finds the escapism appealing–and the prince in the story appealing, too.  Once, when she is looking at the pictures, she sees that things have changed slightly.  She starts to examine each page, and eventually realizes that everyone in the book is alive, but magically forced to reenact the story every time a reader reads the book.  No one minds this arrangement except Oliver, the prince, who is as desperate to escape the monotony of his existence as she is to escape into his story.  When they start to work together to get Oliver out of the story, their relationship deepens.

Jodi Picoult wrote this story with her teenaged daughter, and I picked it up because I thought people would be asking about the newest book by Jodi.  I have never read her other books, but apparently they also switch perspectives.  This book changes between Delilah and Oliver’s point of view while being interspersed with the original story in which Oliver is trapped.  The different points of view are clearly defined by different colors and fonts, which really helps.  It is not the format that is confusing–it is the basic idea that characters are still living in books after we close the pages.  I could get past that idea if I were drawn into the characters, but everything kind of surface level.  I did not believe in their relationship or the development of the characters in the story.  This read like a well-done fanfiction to me!  This seems like exactly the kind of book I would like, and I didn’t, so I am not sure it would appeal to a wide range.  It may work well for a younger reader who likes the concept of books being real.  The whole thing was done significantly better in Inkheart!